This is an amazing rubber and is made in the European style. The sponge is soft and the top sheet is not tacky as compared to the other sheets that are available in the market. This helps the users to generate a high amount of spin and speed too.

The rubber sheet is smooth.The speed of the table tennis rubber is 9.1 and the control rating is 7.1. The sheets are used to cover one side of the blade. 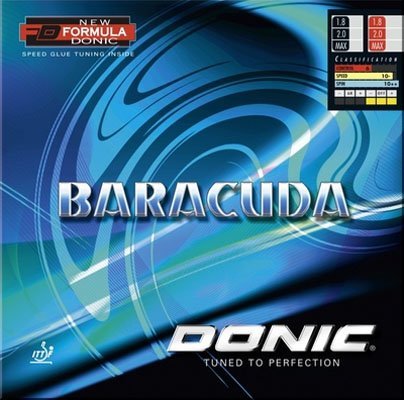 Forehand of the blade

The forehand side is able to produce the topspin. The rubber is soft and therefore it is easy to produce good dwell time. This dwell time will help produce a good spin when you struck the ball. Since the rubber is soft, it is less susceptible to backspin. Flipping backspin as well as looping with this table tennis blade is quite easy and is a good technique.

The rubber of the table is also quite responsive and quick. It functions nicely and with good strokes. The throw angle of the rubber is great which makes it reach farther and also achieve a high degree of consistency. The ease of use of the table is also great still some players might not like the speed that the rubber produces. The speed is less especially on the forehand side.

According to the reviews that we see regarding the table tennis rubber we find that this performs very well during the backhand stroke and this is the side that is mostly preferred by the users. It might not have the highest rating for speed but it is still able to produce the force and the strokes that are required. This makes it quite suitable for the backhand side and hitting through this is the most used strategy.

The spins that the users produce using it include the forgiving nature and the top sheet makes it perfect for use. The pushes are finessed and the opponents can apply force to the ball too.

This table tennis rubber helps to improve the serves of most of the players and it also has a good range of speed that the opponents might find difficult while playing in the matches. For the backspin serves the opponents will find it quite difficult to move the ball above the net and this is because of the high amount of spin that is produced along with it.

The only issue that the users might face and not like about the bat is that it produces a high amount of spin and it might produce some errors from the server-side. Moreover, the players who lack the tactical insight might need to avoid this rubber. This is because they might get knocked off by their own rubber and rather than through the opponent.

This table tennis rubber is best as it produces a high amount of spin and along with that it also forces a lot of errors on the opponents. The rubber is responsive and has a soft sponge. The rubber helps the users to get instant feedback regarding why the chop, loop, and services failed to land.

The sponge is soft and the rubber is suited for attacking the backspin balls. It is also less susceptible to the side and backspin as compared to the tension rubbers. This is regarded as the perfect rubber for the backhand and forehand clicks. This is because the speed is good and it helps to achieve consistency too.

The best technique that you can use with this table tennis rubber is the blocking technique. This rubber almost gives the effortless blocking and also initiates the power required to send the ball back. The rubber is susceptible to spin and thus receiving balls with this is not an issue. The rubber is great for defensive play and also blocking. Counterattacks are also great and need no extra amount of force.

This table tennis rubber helps to get a new layer of depth and adds it to the game. The gameplay is great and the hitting can be used for power against the opponents.

These rubbers are faithful and the best in the market. This is considerably cheap as compared to the other table tennis rubbers of this range.

There is no gap of quality in the table tennis rubbers and these are used by professionals. This could be the best addition to someone’s game and is the best for the intermediate players as well. Advanced players can also use it as it produces great spins, chops, loops, and pushes.

This table tennis rubber provides the consistency and variety that is required. It also helps in improving the different parts of the game.